Angerona: The Secret Name of Rome

A Shakespearean tale of blood and honour 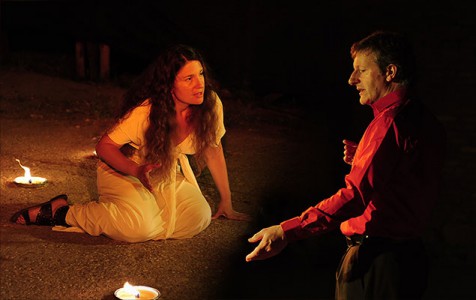 In a niche in the Temple of Pleasure, the Romans kept the statue of one of their most mysterious and ancient deities – Angerona. She was the goddess of sadness and silence, qualities that have marked the lives of abused women since Classical Antiquity and before.

This is the story of Lucretia ... a woman who broke that silence.

This story has been told and retold by Classical writers such as Livy (Titus Livius Patavinus) and Ovid (Publius Ovidius Naso) and spread throughout Europe until it was taken up by Shakespeare himself, the great master of passion, blood and dark comedy.

This daring adaptation mixes the best of contemporary storytelling with Shakespeare’s own text and a visual theatricality.

Featuring Michael Harvey and Paola Balbi, original soundtrack composed and performed live by Davide Bardi. Produced by Raccontamiunastoria and Michael Harvey. Paola Balbi and Michael Harvey are leading performers and teachers in the contemporary European storytelling revival and have joined forces to cross boundaries between cultures and art-forms. This collaboration has grown out of three years of experimentation and discussion during a number of international projects. The project started as a dissemination  of  MY.T.H.O.S Grundtvig  Life Learning Programme.