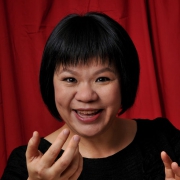 A theatre practitioner for over 25 years and a storyteller for a decade, Verena Tay has published a short story collection, Spectre (2012), and three play collections, and edited four fiction anthologies. An Honorary Fellow at the International Writing Program, University of Iowa (Aug–Nov 2007), she is studying part-time for an MFA in Creative Writing (City University of Hong Kong).

One of her missions in life is to bring traditional myths/stories alive for modern audiences by creating performances [Medea: One on One, (2001–2)] or incorporating such elements into her writing [examples can be found in Spectre and her play collection, In the Company of Heroes (2011)] and then into performance [The Lunar Interviews (2008), Bumiputra Cina (2009), Tanah Pusaka: Haunting Stories of a Land Possessed (2013)].

As a storyteller, Verena brings stories vocally and physically alive in her unique fashion, delighting both adults and children across Singapore and audiences in Australia, the US and Malaysia. A founding Professional Member and current President of the Storytelling Association (Singapore), Verena has successfully coached many people to improve their storytelling craft through various courses, notably her popular Beyond Storytelling 101 workshop, since 2008.