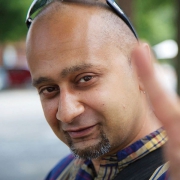 Executive Director of the International Storytelling Center, which produces the acclaimed National Storytelling Festival, Kiran’s diverse career history includes work as an artist, curator and teacher; and encompasses award-winning national and international arts, cultural and human rights programs in the UK. As a folklorist, he emphasizes his interest in “the power of human creativity, arts, stories and social justice, and the notion of a truly multicultural society”. After 9/11, he developed folk and faith-based programmes at the National Museum of Scotland. He has created a number of peace and conflict resolution initiatives exploring issues of religious, ethnic and sectarian conflicts in Scotland and Northern Ireland. In other arts-led projects, he has tackled such issues as poverty, gang violence and modern-day slavery. As an artist and community curator Kiran developed integration projects through poetry, music, dance and storytelling—and led the Helen Keller International Arts award, establishing disability arts as part of Glasgow’s Creative UNESCO City of Music. Kiran became an advisory member to the UK national commission for UNESCO Scotland.

In 2012, Kiran was invited to give an address at The United Nations Headquarters entitled Telling Stories That Matter.