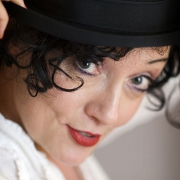 Katrice Horsley is the National Storyteller Laureate UK (2012 – 2014) and co-founder of the ‘The Birmingham Storytelling Café,’ an incredibly successful storytelling event for adult audiences. Katrice has a lyrical and captivating performance style that she has used at performances in China, Mexico, Argentina, Peru, Belgium, Ghana, Kenya and Europe.

Katrice believes that stories helped her through difficult moments in her life and gave her a safe world to inhabit when the real world became too chaotic. This belief led her to work with children and she has a background in playwork, community work and child development. Her skills have led her to work in prisons, with street gangs, in areas of conflict, in local communities as well as educational organisations. She believes that stories have the power to connect all people, irrespective of age, gender or background.

Katrice has developed her passion for communication in enabling people to share their stories and celebrate and understand those of others. This has led her to work for a range of organisations including the BBC, (for whom she was the main consultant of a storytelling web-site) UNICEF, UNHCR, British Council and The British Heart Foundation. She has written a few publications and is now working on a series of children’s picture books around the theme of resilience. She has conducted Masterclasses in narrative for groups as diverse as The London School of Economics and Nursery workers in Cairo. She is also known as a trainer in the field of creative evaluation  and helped set up and was co-director of the Traditional Arts Foundation – a Midlands based organisation, that promotes the traditional performance arts and explores their uses in education and development. She offers a wide range of training in many areas from performance to language development and is often used as an inspirational and motivational speaker.